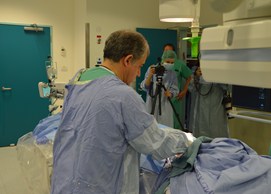 Atrial Fibrillation is one of the most common Cardiac dysrhythmias, affecting about 7 million people worldwide. In Israel alone there are an estimated 70,000 sufferers. Because of the dysrhythmia – which causes a rapid heartbeat of approximately 400 beats a minute – the heart does not working efficiently. This could have many ramifications, including breathing difficulties, chronic fatigue and heart failure.

In many cases, cardiac dysrhythmia cannot be neutralized with drugs and patients are susceptible to a higher risk of strokes and heart disease.

Shaare Zedek is one of the first centers in Israel to conduct the new cryoablation procedure (using gas to freeze tissue). The burning is performed through localized freezing using a balloon, which is much faster and more effective than existing ablation treatments. Using screening and electrical monitoring, a balloon is blown up in the pulmonary veins by injecting liquid nitrogen, which freezes it to minus 40 degrees. The frozen balloon then burns the area affected by the dysrhythmia.